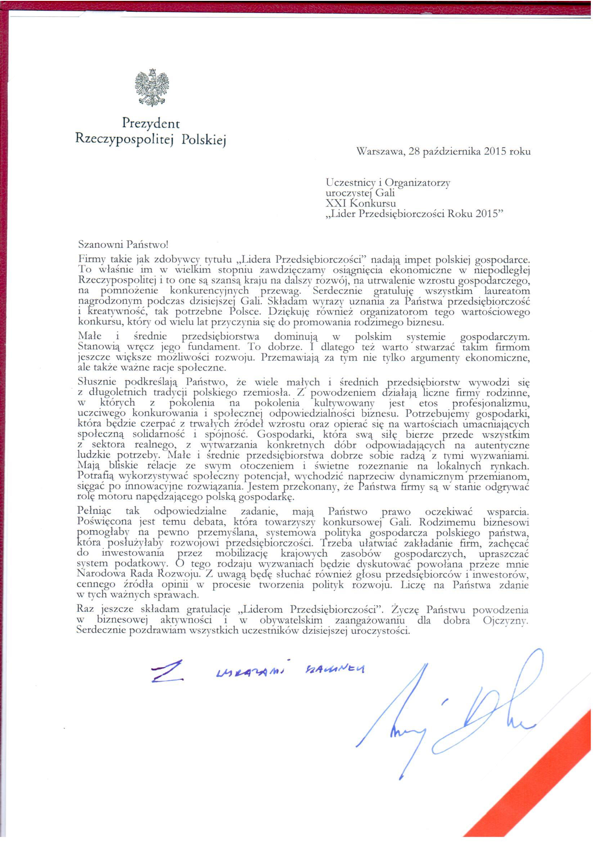 With great pleasure indeed would we like to let you know about another prestigious distinction that has found its way to the hands of Pro-Project’s representatives.

“The Business Leader 2015” is recognised as one of the oldest and most valued competitions whose top of the list object is to promote broadly understood business activities in Poland.

The title of “the Business Leader 2015” is a distinction that has been awarded since 8 September 1994. The said competition is organised by the Foundation of Small and Medium Businesses and the Mazovian Chamber of Craft and Enterprise. It adds weight to especially active, innovative, competitive and dynamically developing craft, trade, production and service companies operating all over the country. This title is also sought for by individuals, business environment organisations, as well as local self-government units, active in promoting and developing small and medium businesses in Poland.

The competition’s chapter has awarded prizes in four categories, the criteria being the size of the company and its scope of operation.

In this year’s edition of the competition, the Pro-Project company has been included as one of the 34 award winners from around Poland, receiving an award in the category “Small Company”. The gala crowning the Competition was held on 28 October at the seat of the Warsaw Stock Exchange.

The honorary patronage of the conference was assumed by the Minister of Economy, Mr Janusz Piechociński, and the Marshal of the Mazovian Province, Mr Adam Struzik. During the formal opening of the Gale, the letter from the President of the Republic of Poland was read out, addressed to the Award Winners of this year’s edition of the Competition and those participating in the Gale.

Being awarded “the Business Leader 2015” title is the crowning of hard work, emphasizing the place of innovation in the process of managing a company.